Putnam county, NY: Vote passed through senate for the second year in a row to allow Putnam county a ten day reprieve of sales tax in August for ten days. New York does not have a state-wide sales tax holiday as of yet. New York Sales Tax Holiday 2016 can be celebrate by some counties though. 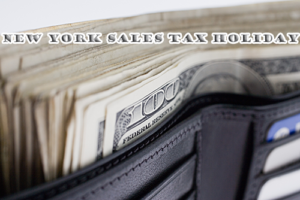 A bill that would eliminate the county portion of sales tax in Putnam over a 10-day period in August passed the State Senate this week.

The legislation, which was requested by the Putnam County government, would mean shoppers enjoy a 50 percent sales tax reduction, from 8.38 percent to 4 percent, when shopping in the county from August 20th-31st, for clothing and footwear under $110.

“While I am grateful to Senator Murphy and the County Legislature for their continued support to enact the 10-day reprieve of the county’s portion of sales tax during the back-to-school season, we still need the Assembly to pass the bill,” said Odell. “Putnam has requested the tax holiday in previous years, but it has not been OKed by the Assembly. This year, we hope they will vote in accordance with the needs of Putnam constituents.”

“Due to high taxes and Connecticut retail centers less than 20 minutes away, Putnam County retail businesses are up against the stiffest competition in New York State,” said Jennifer Maher, Chairwoman of the Putnam County Chambers of Commerce. “Our retail stores rise to the occasion with excellent customer service and unique offerings. This sales tax free week would give them an edge on sales and be an effective “thank you” for their commitment to our county. “

Of the total 8.38 percent sales tax rate in Putnam County, four percent of the generated revenue goes to the state and the remaining 4.38 percent goes to the county. This bill would eliminate the local share during the 10-day period. After passing unanimously through the Senate, the bill now heads to the Assembly.